Free UK Shipping for Orders over £30

Magic The Gathering's Standard format is in a really, really good place right now. We're free of Throne of Eldraine and its overpowered warping effect, and the new cards introduced in Kamigawa: Neon Dynasty were a breath of fresh air. With in-store play now back in full swing and the Pro Tour making a comeback, now is one of the best times to get into Standard. And a perfect way to do that is with this year's Challenger decks. 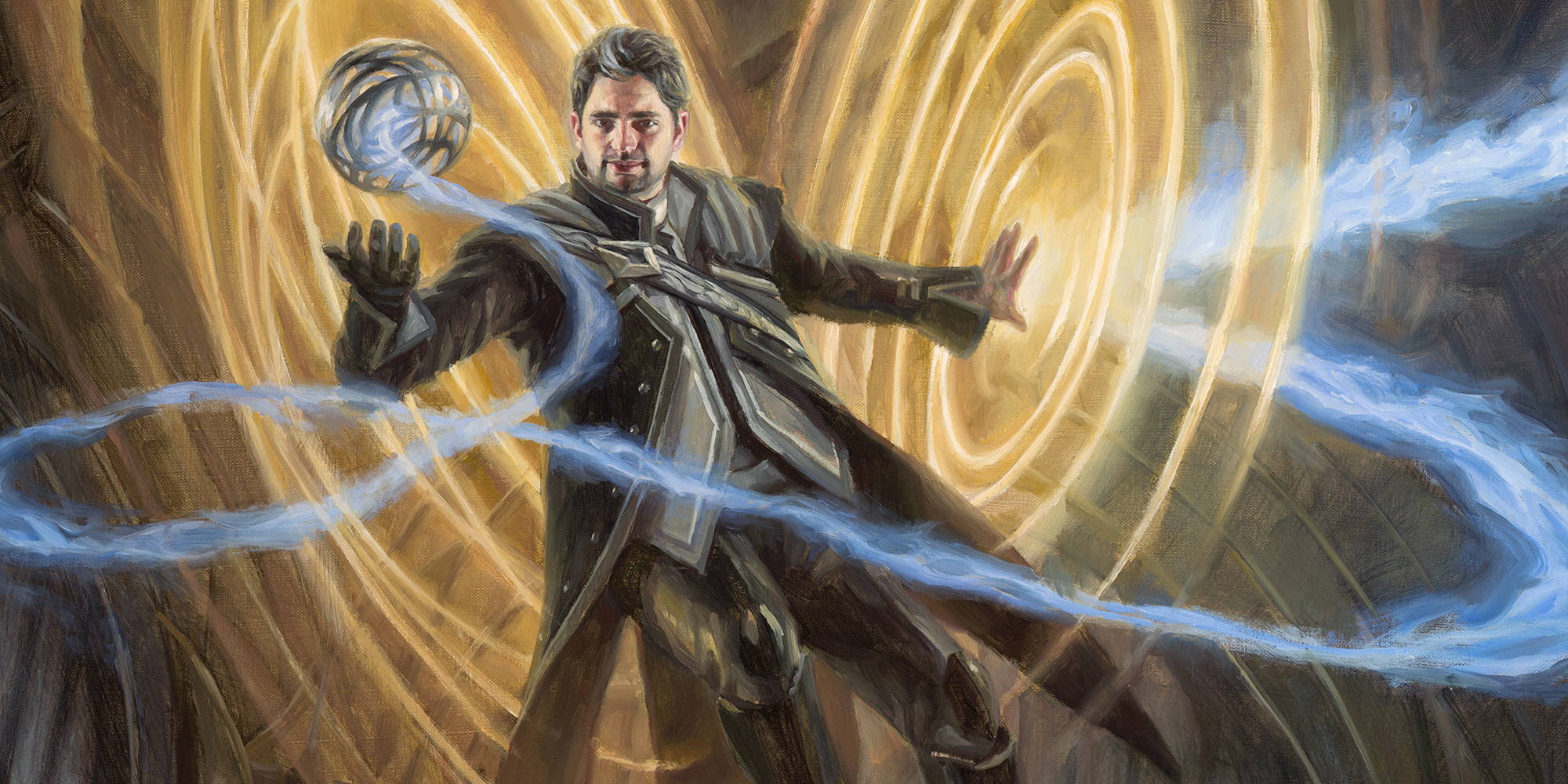 Magic The Gathering's Standard format is in a really, really good place right now. We're free of Throne of Eldraine and its overpowered warping effect, and the new cards introduced in Kamigawa: Neon Dynasty were a breath of fresh air. With in-store play now back in full swing and the Pro Tour making a comeback, now is one of the best times to get into Standard. And a perfect way to do that is with this year's Challenger decks.

The Challenger Decks 2022 are four preconstructed Standard-legal preconstructed decks that you can open and play straight away. Though these decks were developed before the launch of Neon Dynasty and only have cards from the set in their sideboards, they still include some of the most powerful cards and most-played archetypes in Standard. These decks are full of staples and are amazing jump-off points that can be easily upgraded should you want to get more into this special format. 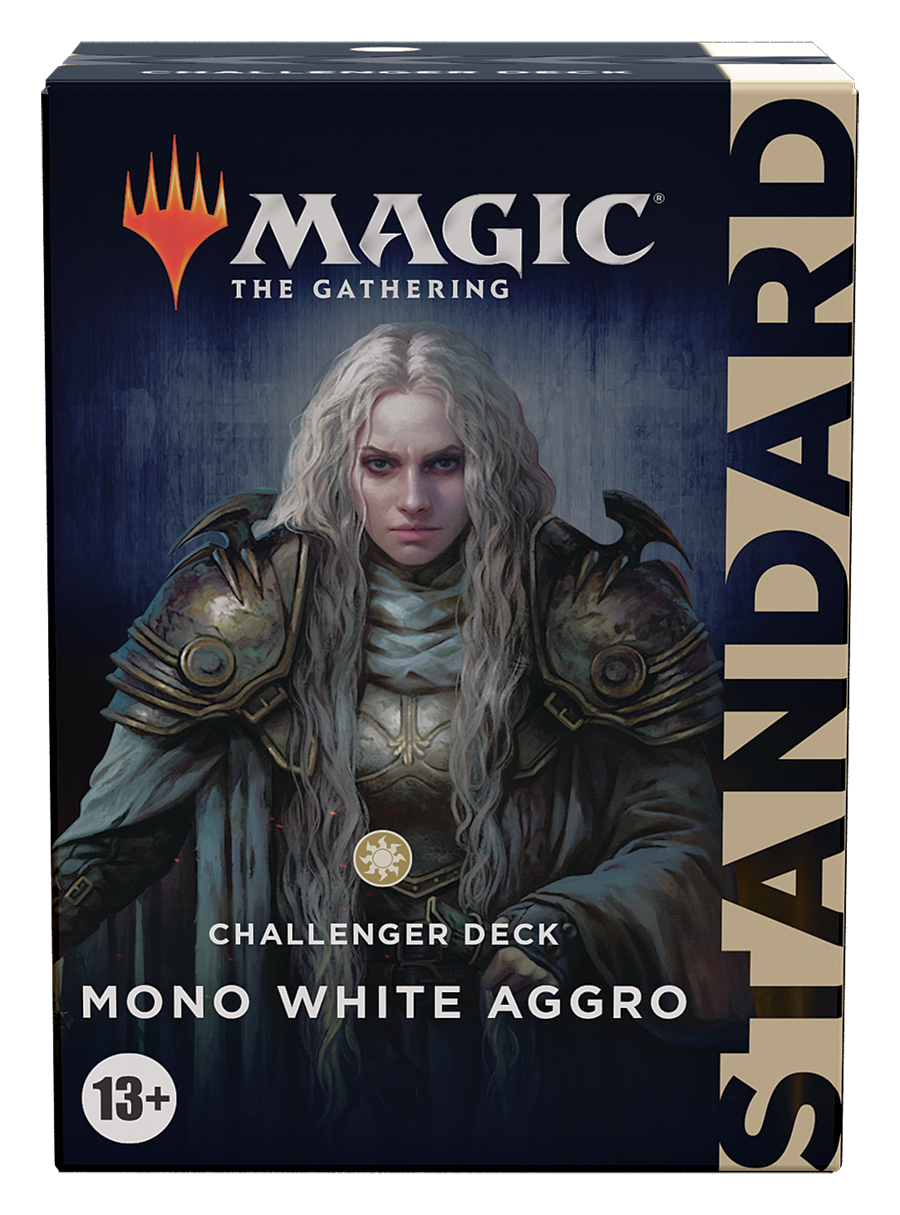 2 Reidane, God of the Worthy

4 Monk of the Open Hand

4 Usher of the Fallen

Mono White Aggro is a deck all about throwing out many creatures. If you've never known the satisfaction of crushing an opponent under the weight of an army of soldiers, clerics, and angels, then you've clearly never played Mono White Aggro.

There are a whopping 30 creatures here, including the incredible Skyclave Apparition, Luminarch Aspirant, Codespell Cleric, and Elite Spellbinder. There are also three copies of Paladin Class, which can easily be levelled up to turn your horde of attackers into a game-winner. Notably, you also get 20 Snow-covered Plains in the box – as Kaldheim gets further and further away, these will be more difficult to come by, so it's worth stocking up while you can!

Kamigawa: Neon Dynasty gave us lots of new toys for this deck that also make excellent upgrades. Eiganjo, Seat of the Empire is a land that can be channelled to deal four damage to an attacking or blocking creature. The Wandering Emperor is a Planeswalker with Flash that can exile creatures, make tokens, or buff a creature with a +1/+1 counter and first strike unti9l the end of the turn. Both of these cards are brilliant for clearing potential blockers out the way to let your creatures get in and cause some real damage.

One important thing to note here: these decks were produced before Faceless Haven was banned in Standard, and there are three of them in the Mono White Aggro deck. If you're playing the deck completely un-modified out of the box, it is still considered Standard-legal. If you upgrade or change the deck, you'll also need to take out those Faceless Havens and replace them with something else (like those Eiganjo, Seat of the Empires). At least you'll have three Faceless Havens for your Pioneer, Modern, or Commander decks though!

3 Blood on the Snow 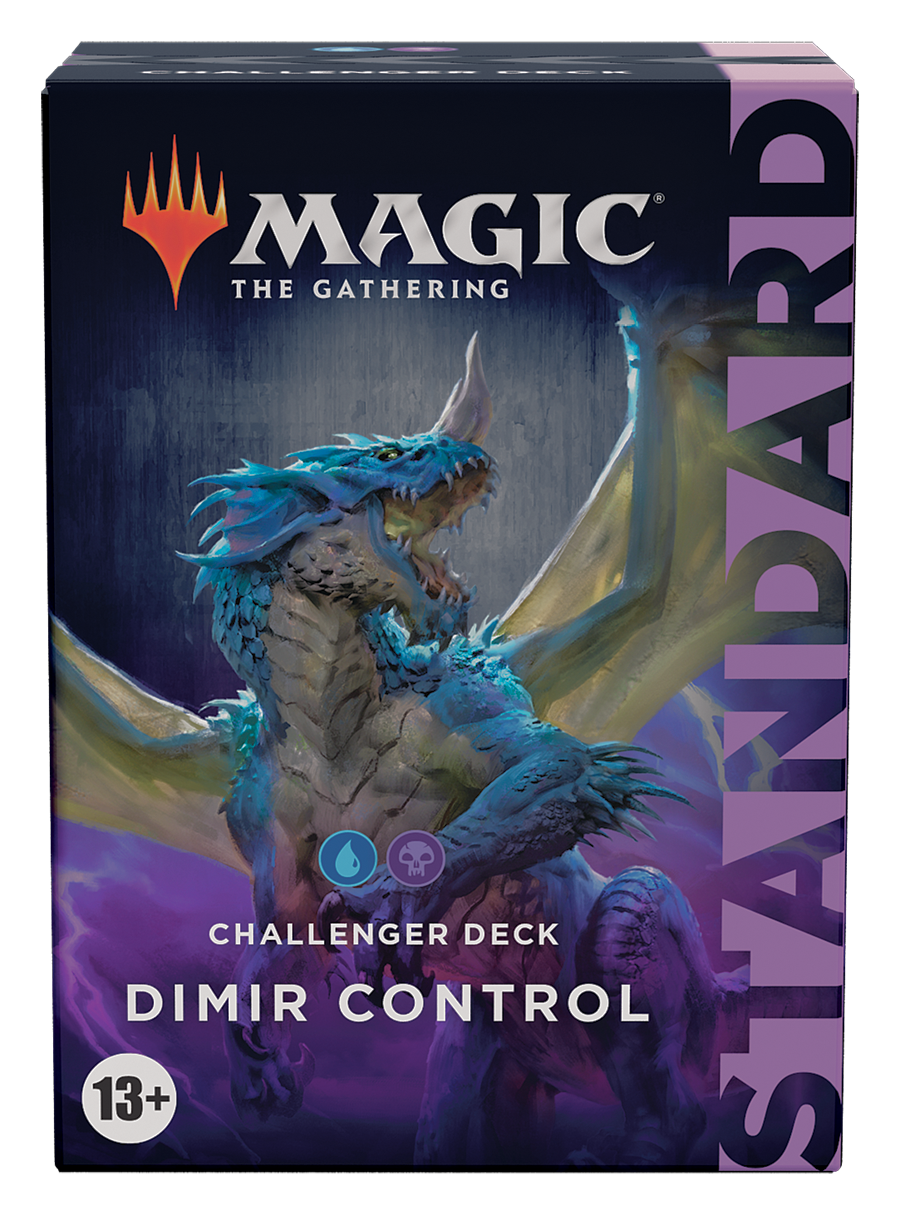 Like most control decks, this one is light on the creatures. It does include a Hullbreaker Horror, which has become a terrifying force with its ability to bounce spells and permanents back to their owner's hand with every spell you cast. There are also two Bloodvial Purveyors in the sideboard, which can dissuade your opponent from casting spells if the threat of a massive, flying, trampling Vampire is too big for them.

The main draw of this deck is in its instants and sorceries: everything from Power Word Kill to Saw it Coming, Hero's Downfall to Jwari Disruption is in here, giving you a box full of many of the best control spells in the format right now. Throwing in some decent lands like four copies of Shipwreck Marsh is also very nice indeed.

One card it is missing that plays a big part in Dimir Control is Valki, God of Lies. The reason for this is likely because it's a double-faced card (which Wizards avoids including in preconstructed decks if it can help it), but it's an incredible control piece that lets you exile and cast a creature from your opponent's hand. If you splash into red a bit you could even play the opposite face, Tibalt, Cosmic Imposter for a neat Grixis Control deck instead.

The Pathway lands are also absent here, which are effectively a staple in any multicolour Standard deck at the moment. These double-faced lands give you untapped access to either colour of mana and are fantastic ways to beef up the already-impressive mana base even further. 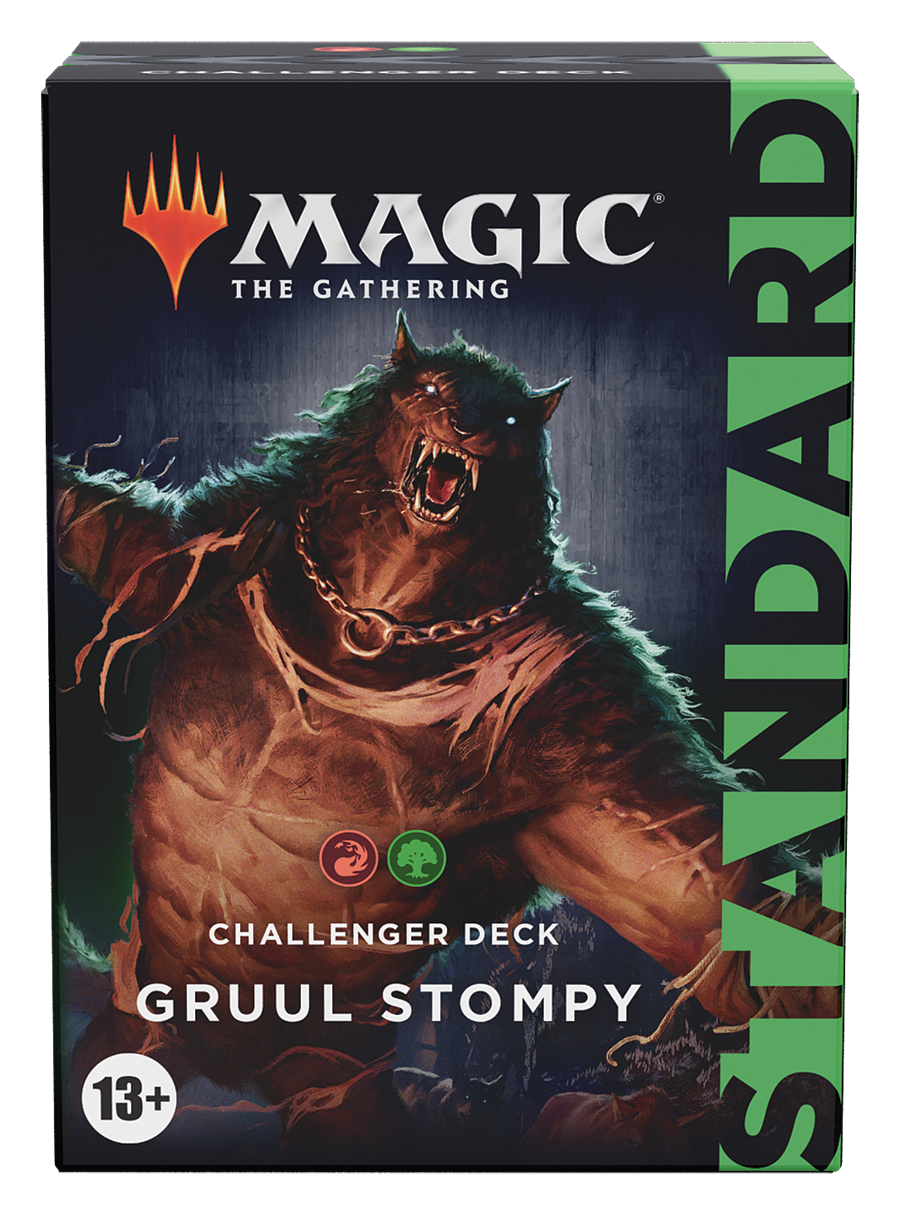 1 Light Up the Night

2 Lair of the Hydra

2 Lantern of the Lost

Stompy decks are always a lot of fun. Nothing's better than taking your team of massive creatures and trampling all over your opponent with them. The 2021 Challenger decks included a sweet Mono Green Stompy, but Wizards has added red to it for this awesome Gruul take on it this year.

There are some brilliant cards here, like Ranger Class (arguably the best of all of Forgotten Realms' Class cards), Ulvenwald Oddity; Magda, Brazen Outlaw; and even a Goldspan Dragon – arguably the best creature in the Standard format right now. Halana and Alena, Partners is also an excellent inclusion here, as the bigger she gets, the bigger another creature you control can become as well!

Stompy decks are all about big creatures, and so there are a fair few awesome upgrades you can make here. Vorinclex, Monstrous Raider would be a scary way ot doubling the +1/+1 counters Halana and Alena create, while Old Gnawbone could provide you with a steady stream of treasure tokens to keep those big creature spells coming. Or why not an Avabruck Careaker, which can either put two +1/+1 counters on a creature, or transform into Hollowhenge Huntmaster and give all your other permanents hexproof?

Lastly, of course we're going to run the best card from Kamigawa: Neon Dynasty – Boseiju, Who Endures. A land that can be channeled to destroy an artifact or enchantment (and then have the controller search for a basic land) is so flexible. Hit your opponent with it to take out their key pieces, or use it on one of your unhelpful artifact tokens to allow you to ramp a bit more!

2 Den of the Bugbear 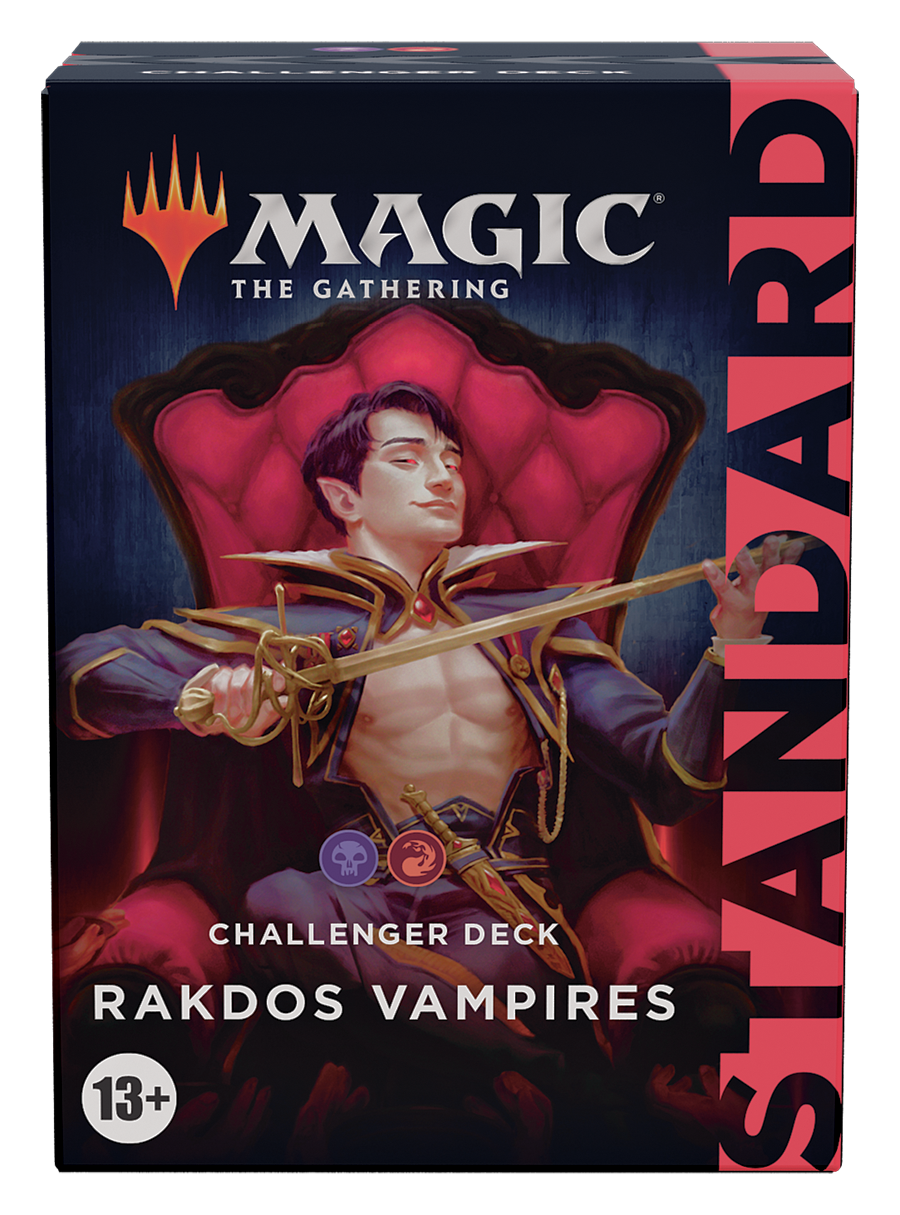 The final Challenger 2022 deck cares all about Magic's favourite bloodsuckers, with you playing lots of red and black Vampires to produce plenty of blood tokens to work with. There is also a heavy Aristocrats element to it, as many creatures can be sacrificed for brutal effects.

You've got cards like Voldaren Bloodcaster, Voldaren Epicure, and Bloodtithe Harvester to produce Blood tokens. You can then throw those tokens at creatures like Sokenzan Smelter to make creature tokens with Haste, or Mokutai Soulripper to give it a +1/+1 counter and menace. You can even sacrifice them to a Voltage Surge to deal extra damage.

The mana base for this deck is also surprisingly great! It's the only deck of the four to include the double-sided Pathway lands, two Den of the Bugbears, and three Voldaren Estates. In Standard you couldn't really ask for much better (though maybe Haunted Ridge could be your first upgrade?)

You may want to run a few copies of Bloodvial Purveyor. It adds an exciting element of control to your deck by dissuading your opponents from casting spells, lest they make a blood token and make your Purveyor stronger when it attacks them.

Vampires' Vengeance is also a good shout here, especially as a sideboard card. It deals two damage to any non-Vampire creature, and you get a blood token. Considering Mono White Aggro is so popular in Standard right now and features many low-toughness creatures, being able to wipe them all out and keep your Vampires in play is very nice indeed.